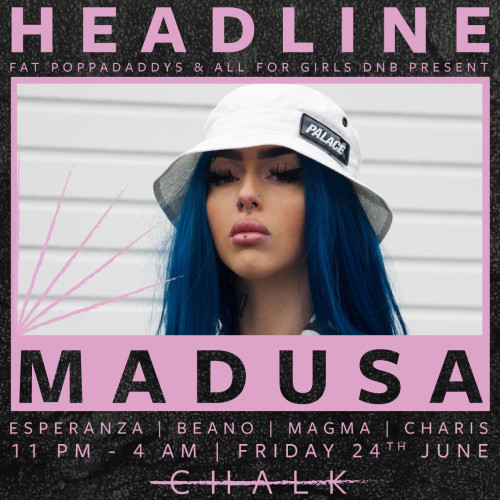 Fat Poppadaddys & All For Girls DnB:

Friday 24th June 2022 - 23:00 pm - 4:00 am
GET TICKETS
Headline is bringing a new wave of fast tempo & broken beat drums, with an all-female drum and bass lineup. You can expect to hear new sounds from the likes of BEANO, Magma, Charis and Esperanza, all true weapons on the decks.

HEADLINER:
MADUSA:
Madusa is a name you should be familiar with unless you’ve been living under a rock for the last few years, and if you are not then it’s about time you found out.

Maddie began earlier than most of her generation when it comes to the art of mixing, learning the craft by cutting old school hip hop and R&B on 1210s as a child, the foundation to the artist now known as Madusa.
Native to Leamington-Spa, Madusa is now well known for her dark and grimey drum and bass sets which have already caught the attention of industry heavyweights like T>I, Bou, Upgrade, Sub Zero, Goldie, Trigga and Skibadee.

No surprise then that Maddie has become a regular feature on industry-leading promotions Worried About Henry and Metalheadz to name a few.

Now part of the HM Agency family Madusa has levelled up again, featuring on Hedex’s Nightmares Tour, as well as the upcoming HMA Showcase in collaboration with DNB Collection in Birmingham in March 2022.

The future is bright for Madusa, don’t blink or you might miss the come up.

Esperanza a Brighton based DJ who found the love of the genre two years ago, the manifest started from the rave scene and she hasn’t looked back since.

Beano is a Brighton based DJ who will have you reminiscing those triple drops. She is mainly known for her TikTok bass in the boot

Charis a London based DJ will be bringing you more than just a night of breakbeats. Decks mixed with her production skills will have you dancing for days.

Magma is a Bristol-based DJ, massively known in the scene for her hardcore fast tempo and Jump up sets.

Not A Phase, Mum!