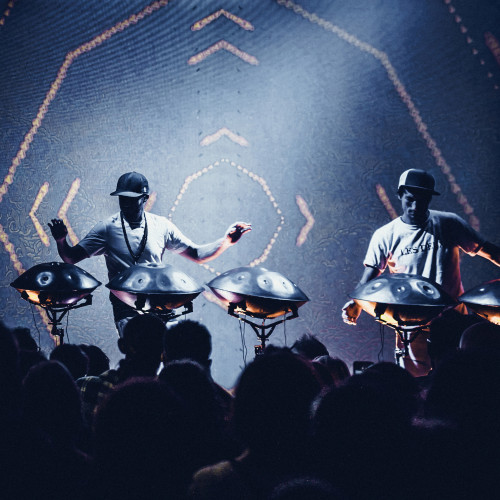 Their first music release and video “Once Again”, which gained wide renown and was watched over 50 million times online. Its viral success introduced people around the world to a captivating new instrument and saw the emergence of a global fan base devoted to this groundbreaking musical project.

The founding members, Danny Cudd and Markus Offbeat, met on the shores of Goa, India, forging their creative partnership in its vibrant international arts scene. Over the following years, the Hang Massive project evolved from busking on the streets of European cities to performing festival line-ups and high profile music venues around the world of up to 1500 capacity per night.

2018 saw the release and great success of their album “Luminous Emptiness.” The powerful collaboration features standout tracks like “End of Sky” and “The Secret Kissing of the Sun and the Moon,” which has amassed almost 12 million views online. During the Luminous Emptiness Tour from 2018–2019, they performed sellout gigs across Europe, the UK, South America and Russia.

Hang Massive have scheduled single and album releases, plus a remix album featuring notables musicians to be released between now and 2023. The band are currently working on their new audio visual experience for their upcoming world tours and festival performances.