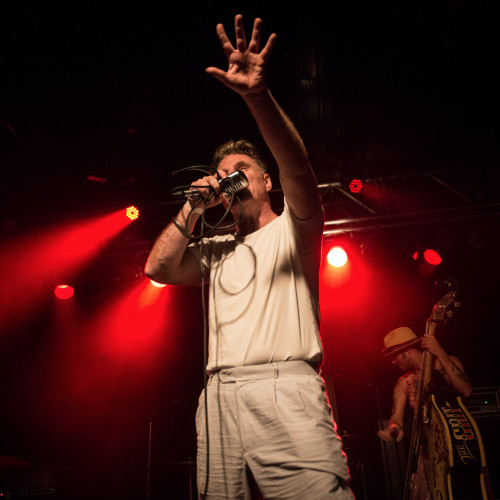 Legendary psychobilly KING KURT are heading to the seaside with their special kind of madness. Forming in 1981 as Rockin’ Kurt and his Sauer Krauts the band changed name a year later with the arrival of new vocalist Gary “The Smeg” Clayton to the now infamous King Kurt.
Signing with Stiff in 1983 it wasn’t long before the band found themselves on Top of the Pops and with a hit single on their hands.

The band originally split in 1988 but audience demand has had them coming back for more to deliver more of their madness since 2012. A band if you’ve seen before you’ll want to see again an if you haven’t well now’s your chance.

THE POLECATS
The Polecats formed in 1977. The original line-up was Tim Worman (a.k.a Tim Polecat, vocalist), Martin "Boz" Boorer, (guitarist and vocalist), Phil Bloomberg (bassist), and Chris Hawkes (drummer), who originally played under the name "Cult Heroes." Finding difficulty persuading promoters to book them on the rockabilly circuit with a name sounding "too punk", they adopted Hawkes' suggested band name The Polecats. Hawkes was later replaced by Neil Rooney.

The band were first signed by the fledgling British rockabilly record label Nervous Records, and recorded their first single "Rockabilly Guy" at Guitarist Alan Warner's "Lane Studios" in 1979. Formerley with the hugely successful "Foundations" band Warner toured and recorded with the Polecats for about a year.