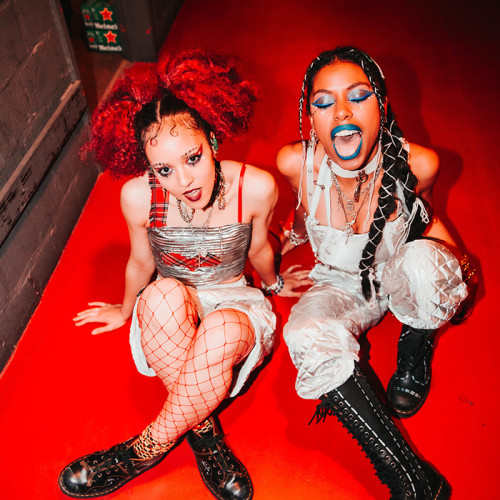 Asked about what it takes to make it into a Nova Twins song, the heavy alt. rock renegades
have a few words that spring to mind. “Power and fight” replies singer & guitarist Amy
Love. “Imagination” adds bassist Georgia South. “We imagined this band because we didn’t
have any one like us to look up to. That was the fun bit. There were no rules to who we can
be.”
Nova Twins are the zeitgeist-capturing polymath pioneers that our times have been waiting
for. Their debut album ‘Who Are The Girls?’ planted their flag as outliers on a mission. The
same fighting spirit is ingrained in their new, Mercury Shortlisted album ‘Supernova’, a
piece of work that’s fearlessly itself – once again playing with genre and rich in different
moods, textures, and layers, all the while retaining that purity & simplicity of the essential
elements: South, Love, bass, guitars, drums, and a whole lot of energy.

A clash of ideas from the worlds of punk, rap, pop, rock & beyond, their sound is one that
smashes genres and showcases the many facets of the duo, resulting in one of the scene's
premiere live bands & fiercest festival acts. Nova Twins reach a very broad church, without
diluting what they’re all about.

If more artists blazed a trail like this, we’d be celebrating a lot more difference, rather than
craving what’s safe and similar. From being “shunned” when they arrived on the scene, now
Nova Twins are leading a game all their own. Now, there are no rules.