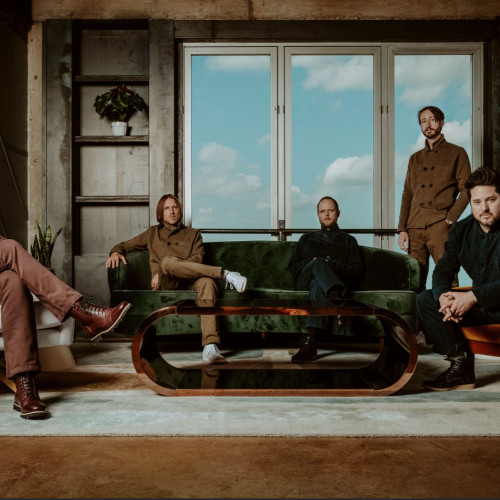 The result is a powerful, warming expression of resolve and renewal for Midlake, opening up new futures for the band and honoring their storied history. Formed in the small town of Denton, with roots in the University of North Texas College of Music, Midlake delivered an auspicious debut with 2004’s Bamnan and Slivercork. For the follow-up, they looked further afield and deeper within to deliver 2006’s wondrous The Trials of Van Occupanther, a modern classic pitched between 1871, 1971 and somewhere out of time: between Henry David Thoreau and Neil Young’s After the Gold Rush, between 1970s Laurel Canyon thinking and a longing for something more mysterious.
Confidence bolstered by a growing fanbase and a developed sense of their own far- reaching abilities, Midlake – a band acutely attuned to seasonal shifts – then embraced change. In 2010, they visited darker psych-folk thickets for The Courage of Others and backed John Grant on his lustrously spiky breakthrough album, Queen of Denmark. When singer Tim Smith departed Midlake in 2012, Pulido stepped up to the lead vocal role for 2013’s freshly exploratory Antiphon, teasing out singular routes through vintage electric-folk pastures.
Since then, domestic projects have beckoned as children entered various band- members’ lives. Pulido joined Bob Dylan’s 75th birthday celebrations at Nashville’s prestigious Ryman Auditorium and launched the project BNQT with a cast of all-star guests, backed by Chandler, McClellan and Smith; Pulido and Chandler also recorded solo albums.
In reuniting, the bandmates were adamant that Midlake needed their absolute focus. The result is an album of tremendously engaged thematic and sonic reach with a warm, wise sense of intimacy at its heart: an album to break bread and commune with, honor the past and travel onwards with. In ‘Bethel Woods’, Pulido sings of gathering seeds. On For the Sake of Bethel Woods, those seeds are lovingly nurtured, taking rich and spectacular bloom.

Bess Atwell:
Artist Bess Atwell is full of questions: on life, death, love, loss... and how things that at first seem mundane become profound when looked at in a different light. On her sensational album, Already, Always, Atwell offers one of the most assured records by a British artist in years. Released via Lucy Rose's Communion imprint Real Kind Records, it focuses heavily on Atwell's own experiences yet has a universal appeal - demonstrated already by the support from the BBC's 6music, and millions of streams of Atwell's earlier, self released, singles. "What I really care about is people listening to this album and saying, ?God, I feel like I know her,'" the Brighton-based artist explains. "I wanted to illustrate, not just the romance in relationships, but that bit that comes afterwards."

Bess Atwell's new album, ?Already, Always', is a flourishing feat of gentle undulations, marking a bright blossom into the next generation of indie-folk' - Yuck Magazine.